Dutch Baby Recipes and Ideas Your Family Will Love

This post was most recently updated on February 4th, 2017

When I was growing up my family loved to make dutch babies (also called pannekoeken or german pancakes). I also love aebleskivers and crepes but they are so time intensive that I don’t make them very often. I found a place that has mixes that makes them so much easier to make: The Prepared Pantry. They have delicious mixes, flavored syrups, and wonderful recipes. After reading their email I decided my next dutch babies must have fruit and whipped cream! If there’s someone in your life who loves dutch babies, this will be the ideal gift for them.

Overall, I prefer making dutch babies because they’re so easy. You make them in the oven and they puff up so magnificently. The inside is almost like a custard type bread and you can sprinkle powdered sugar on them and eat them with maple syrup. Delicious! What I never considered is how many dutch baby recipes and ways to serve them there are!

Pannekoeken is another name for dutch babies. They are fun and different.  They’re impressive; they rise eight inches above the edge of the pan like magic. You’ll love showing them off to their family and friends. Plus it’s not hard to make enough for a large family or crowd.

How do you serve dutch babies?
You can serve dutch babies/pannekoeken with syrup. There are savory types of pannekoeken, like a garden version with steamed veggies topped with a white sauce or light cheese sauce. There are fruit versions with whipped cream. Even cinnamon sugar would be scrumptious. There hundreds of ways to serve them!
Why I Love Dutch Babies / Pannekoeken / German Pancakes

“Just made my first Pannekoeken in my new pan and it was delicious – very impressive and so easy. Had no idea they were so easy to make.”–Janice P.

Now that you’re feeling hungry…bring on the recipes!

From The Prepared Pantry. This dutch baby recipe is designed for an 11 to 12-inch Dutch baby pan or a skillet with rounded sides. This is a five ingredient–five step recipe that really goes together quickly.

1. Place the butter in a Dutch Baby pan or an ovenproof skillet with rounded sides.
2. Preheat your oven to 425 degrees. Put the rack in the center, not the top, shelf. When you turn the oven on, place the pan with the butter in the oven. When the oven reaches 250 degrees the butter should be melted. Remove the pan from the oven.
3. Whisk the eggs and the salt in a medium bowl. Add the milk. Whisk in the flour until nearly smooth. Your batter is now ready.
4. Pour the batter into the pan.
5. Bake for 15 to 18 minutes or until the top starts to turn golden brown. Serve hot with your favorite syrup. 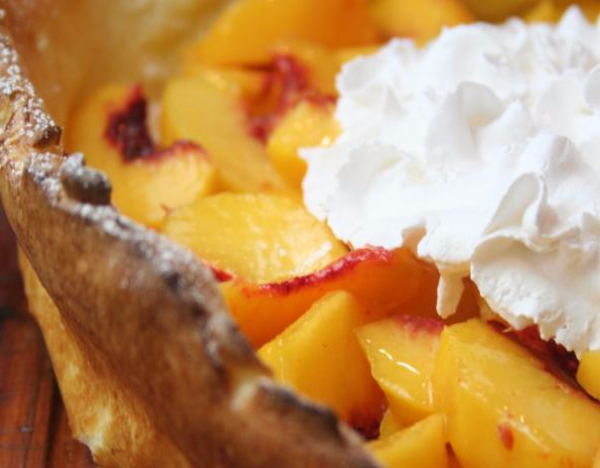 It’s almost peach season in Utah and here’s a fun way to serve peaches for breakfast that’s a lot faster than making a peach pie or crumble!

Another food we love? Waffles. With this ugly but amazing waffle mix. There are many more ideas, dutch baby recipes and more over at The Prepared Pantry.

Hello, welcome to Newspapermom. Here’s what I love…

Searching is in progress

Looking for a new mattress? Check out our Purple mattress review:

Newspapermom is a participant in the Amazon Services LLC Associates Program, an affiliate advertising program designed to provide a means for sites to earn advertising fees by advertising and linking to Amazon.com.
Loading Comments...